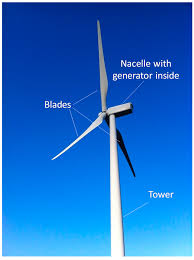 In this article we will learn about the basic application of wind energy . we will also discus about the wind energy generation in india as per state wise.

Energy extracted from the wind is initially energy in the form of rotary, translational, or oscillatory mechanical motion. This mechanical motion can be used to pump fluids or can be converted to electrically heat or fuel. Some of the most effective applications are those that use energy derived directly from the wind, without further energy processing, conversion, or storage. However,If required , Wind-derived energy can be converted to the other form of energy or can be stored through the use of compressed fluids, pumped hydro systems water-saver systems, batteries, hydrogen,flywheel hot water etc. Some energy is normally lost in each of these conversion or storage steps.

A typical wind-powered pumping application is one might use a horizontal-axis wind machine. An example is the ancient jip-sail design that is mostly wind used to pump irrigation water. Large number of water pumping wind mills have been used on Indian farms. Other applications that are being developed include the pumping of water for aqueducts or for pumped hydro storage of energy. In aqueduct systems,Large-scale wind driven units can provided power for the pumping of water from the main reservoir to auxiliary reservoirs in other parts of the aqueduct system. The direct mechanical pumping of the water or through the generation of electricity by the wind units and the subsequent use of this energy to operate electrical water pumps incorporated in the aqueduct system.

Wind power are used to produce mechanical motion which in turn is used to drive heat pumps or to produce heat from friction of solid materials or by the use of centrifugal or other types of pumps or by the churning of water which produce heat from friction and turbulence when the working fluid flows through them. This heat is then can be  stored using any, fluid having high heat capacity, such as water or the heat can be used directly for heating and cooling  of water and air-space for residential, industrial and agricultural buildings. Heating of the building is done by heating system designed to use the electricity generated by the wind machine to provide resistive heating of water that is distributed through the buildings

For direct heating the buildings, home heating system is designed to use a wind powered pump and a restrictive opening to derive direct heat without first generating electricity. Other applications where wind generated heat can be used are crop drying, milk and food processing, green house applications, refrigeration, ventilation, waste processing and frost protection. It is basic application of wind energy.

Wind power can be used to generate electricity by driving synchronous AC electrical generators. In such applications, the electrical energy is fed directly into grid through voltage step-up transformers

Wind energy conversion units are used in a water saver mode of operation by integrating it with existing hydroelectrically networks  Both the wind turbine generation and hydro electric generation can be used in combination to satisfy  demand  At the time of wind blowing, wind power can be used to  generate the electricity and subsequently the load at hydroelectric plant can be reduced by an amount equal to that being produced by it. Hence the load provided by hydroelectric unit is now provided by wind turbines. Thus, some of the water can be saved and stored in  reservoir which otherwise would have been used by the hydroelectric  plant and can be used when wind is not available  The save water can be utilized by using additional hydroelectric generating facilities to produce electricity and provide energy at peak-demand time.

In other applications, wind power can be used to generate d.c electric power which can be used for space heating, resistance heaters or can be  stored in batteries and can be converted into ac power using inverter at the time of use. Electrical energy produced can also be stored in the form of mechanical motion of flywheel or as hydrogen and oxygen gases derived from the electrolytic dissociation of water. The hydrogen and oxygen to be used can be stored gas in tanks, aquifers, caverns etc or I the form of liquid. gas in tanks, aquifers, caverns etc. These are also main application of wind energy.

Wind energy is a popular form of non-conventional energy. It is utilized for drawingwater, which is an essential requirement in watering agricultural lands in the rural areas. In addition, it can be utilized for electricity generation. In india, states like Tamil Nadu, Gujrat, Orissa and Maharashtra are regarded as superior areas with respect to this type of energy  Places that have regularand rapid wind flows are appropriate for this kind of power generation .

These are some application of wind energy examples

Hence these are some example application of wind energy If you will find any incorrect in above article please comment below in comment box.