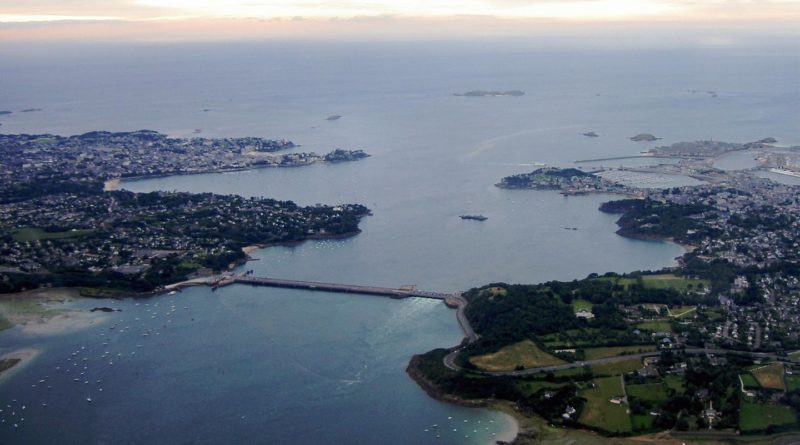 In this article we will know about the Tidal Power plant working costruction application and advantages . We will also learn about the main advantages and limitation of tidal power plant.

The Turbines electric generators and other auxiliary equipments are the main equipments of a powerhouse. The function of dam to form a barrier between the sea and the basin or between one basin and the other in case of multiple basins.

Because small heads only are available, large size turbines are needed: hence, the powerhouse is also a large structure. Both the French and Soviet operating plants use the bulb type of turbine. Of the propeller type, with reversible blades, bulbs have horizontal shafts coupled to a single generator. The cost per installed kilowatt drops with turbine size, and perhaps larger turbines might be installed in a future in a future major tidal power plant.

Dam and barrage are synonymous terms. Barrage has been suggested as a more accurate term for tidal power schemes, because it has only to withstand heads a fraction of the structure’s height, and stability problems are far more modest. However, the literature does not always make the distinction, even though heads are small with tidal power cut offs.

Tidal power barrage adds also to the price tag of the plant, short barrages are preferred even if basin size may have to be smaller because of site choice. up to a height of 20m, cost remains proportional to length as it is not changed by the need to build a dam wall to withstand high hydrostatic pressure. When the elevation exceeds the 20m limit, costs increase faster with length. Most tidal power plants do not have heads exceeding 20m.

The barrage needs to provide channels for the turbines in prestressed or reinforced concrete. To build these channels a temporary cofferdam is necessary, but it is now possible to built them on land, float them to the site, and sink them into place. According to title which is tidal power plant working construction application we will describe every point.

Tidal power basins have to be filled and emptied. Gates are opened regularly and frequently but heads very in height and on the side where they occur, which is not the case with conventional river projects. The gates must be opened and closed rapidly and this operation should use a minimum of power. Leakage is tolerable for gates and barrage. Since we are dealing with seawater, corrosion problems are actuate, they have been very successfully solved by the cathodic protection and where not possible by paint. Gate structures can be floated as modular units into place.

The sluiceways are used either to fill the basin during the high tide or empty  the basin during the low tide, as per operational requirement. These are gate controlled devices. These topic are escribe title which is tidal power plant working construction application and advantages.

It is generally convenient to have the power house as well as the sluice-ways in alignment with the dam. The design cycle may also provide for pumping between the basin and the sea in either direction. If reversible pump turbines are provided, the pumping operation can be taken over at any time by the same machine. The modern tubular turbines are so versatile that they can be used either as turbines or as pumps in either direction of flow. In addition, the tubular passages can also be used as sluiceway by locking the machine to a stand still. As compared to conventional plants this, however, imposes a great number of operations in tidal power plants. For instance, the periodic opening and closing of the sluiceways of a tidal plant are about 730 times in a year. Tidal power plant  working  construction application and advantages.

The simplest scheme for developing tidal power is the single basin arrangement, in which a single basin of constant area is provided with sluices (gates), large enough to admit the tide, so that the loss of head is small. The level of water in the basin is the same as that of the tide outside. When the tides are high, water is stored in the basin and sluices are closed. When the tides are falling. Sluices are opened to allow water to go through the turbine to generate power. A head of water is obviously required for the turbine to generate water. This continues to generate power until the level of the falling tides coincides with the level of the next rising tide. These are also describe out titile which is tidal power plant working construction application and advantages.

It requires two separate but adjacent basins. In one basin called “upper basin”  *or high pool), the water level is maintained above that in the other, the low basin (or low pool). Because there is always a head between upper and lower basins, electricity can be generated continuously, although at a variable rate.

In this system, the turbines are located in between the two adjacent basins, while the sluice gates are as usual embodied in the dam across the mouths of the two estuaries. At the beginning of the flood tide, the turbines are shut down, the gates of upper basin A are opened and those of the lower basin B are closed. The basin A is thus filled up while the basin B remains empty. As soon as the rising water level in A provides sufficient difference of head between the two basins, the turbines are stated. The water flows from A to B through the turbines, generating power. These are tidal power plant working construction  application and advantages.

The power generation thus continues simultaneously with the filling up the basin A. at the end of the flood tide when A is full and the water level in it is the maximum, its sluice gates are closed. When the ebb tide level gets lower than the water level in B, its sluice gates are opened whereby the water level in B, which was arising and reducing the operating head, starts filling with the ebb. This continues until the operating head and water level in A is sufficient to run the turbines. With the next flood tide, the cycle repeats itself. With this twin basin system, a longer and more continuous period of generation per day is possible. The small gaps in the operation of such stations can be filled up by thermal power. By this title have clear which is tidal power plant construction working application and advantages

There are a number of reasons, why the tidal power generation is still a novelty, rather than a normal source of energy. The reason can be enumerated as below