In this article we will learn about the BJT and FET working construction . will also discuss about the basic working of Transistor.

Transistor is a semiconductor device. I is used as to amplify the signals and switch to electronic and electrical signal and power. Generally it has three terminals (legs) to connect in circuit.

This is responsible for activating the transistor

This is the positive terminal.

This is the negative terminal of transistor.

transistor is a 3 layer semiconductor device. The em miter is heavily doped, base is lightly doped the collector only lightly doped. Outer layer width is much greater than those of sandwiched p on n-type material. For transistor the ratio of width of outer layer to that of sandwiched p or n type material is (150:1). Doping of the sandwiched  layer is less than that of outer layer. this lower doping level decrease the conductivity of this material by limiting the number of free electrons. the term bipolar reflects the fact that holes and electrons participate in the injection process in to the oppositely polarized material

For proper biasing base emitter loop is forward biased and base collector loop is Reverse Biased . the depletion has been reduced in width the due to the applied bias between emitter and base resulting in a heavy flow of majority carriers from P to the n-type material. Due to reverse bias between base and collector the depletion with has been increased and the flow of majority carrier is zero, resulting in only a minority carrier flow. when there is both forward biased and reverse Biased a large number of majority carrier will diffuse across the forward bias PN junction into n type material. since Sandwiched and n-type material is very thin and has low conductivity a very small number of flux career will take path of high resistance to the base terminal. 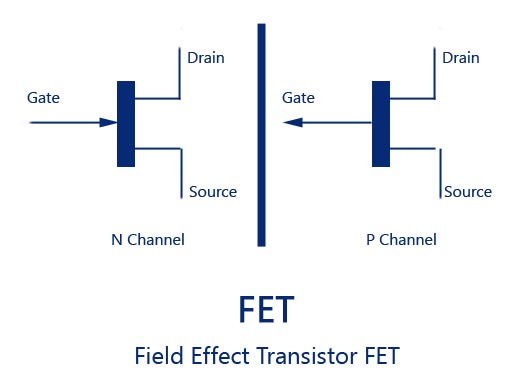 Hence these are BJT and FET  working construction . if you will find any incorrect in above article please comment below in comment  box.

If you want to know more about the BJT and FET working construction you must watch this video.