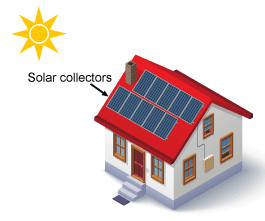 What are main types of Solar Energy Collectors

The first step in the solar energy utilization is the collection of this energy. This is done through collectors whose surfaces are designed for high absorptive and low emissivity. A flat collector consists of the following basic element:. it is very efficient type solar energy collector.
1. A flat plate upon which the short wave solar radiation falls and is absorbed and converted into heat energy.

2. An insulated container to eliminate or substantially reduce thermal losses from the collection system.

3. One or more plates of glass or transparent plastic to reduce the upward heat loss from the collection surface.

4. Tubes or channels to circulate the liquid required to remove the heat energy from the collector to the strong tank.

A flat plate collector is shown in Fig. Solar radiation passes through the transparent cover and is absorbed by the collector plate. A fluid flowing in a passage in contact with the collector is heated and the heat from the fluid is extracted for use. The circulating pump keeps a continuous circulation of the fluid through collector and strong tank. In the storage tank, is working as heat ex changer, fluid heats water which is used for the desire purpose. The efficiency of the collection and conversion process depends on the heat loss to surroundings which in turn depends on the temperature at which the collectors work. The cover plate is transparent to incoming radiation but opaque to infra red radiation of the collector and thus reduces the heat losses. Treating the collector surface with special coating reduces the heat losses still further. These coating can be
(1) particles of copper oxide about 1 u m in diameter,
(2) semi- conductor like silica
(3) layered coatings of calcium oxide and magnesium oxide.

These coating have a high ratio of absorptive emissivity (about 10 to 15 or so) but are very expensive. Al though a variety may be used for the heat transfer in the collector flow channels. All practical system to date have used water or water ethylene glycerol solution, the letter additive being used primarily to avoid problem due to the freezing of liquid in the tube under subzero temperature conditions. it is very simple and less costly type solar energy collectors. Flat plate collector with honey comb structure. There is a growing interest in the use of honey comb cellular structure of various shapes. Some of which are shown in fig. 15.8.their excellent strength to weight ratio they have many application in aircraft and aerospace industries. Many materials like aluminum, glass, plastics etc. are used in the manufacture
Of these structures. It has found that collectors with honey comb cellular structures are more efficient and their use has been proposed in solar heat collectors. The process of heat transfer is a multi mode phenomenon and all the three modes, conduction, con- vection and radiation, should be considered in assessing the overall performance of any structure. In term of conduction affect the cellular surface. May be envisages as an extended surface used to increase the heat transfer area. In terms of convection effects, structure has been found to modify the convection transport from a heated body and in terms of radiation effects, they have been proposed for the creation of artificial black bodies and specials forms of terminal traps. An inclined flat plate solar collector with honey comb structure is shown in diagram.

In spite of the methods of reducing heat losses the maximum temperature at which a flat plate collector works is quite low, around 100 C IN summer and around 40c in winter. Concentrating collectors are more effective but very closely. Parabolic- at around can be   reflector used up to 30000 c However its direction has to be adjusted to follow the direction of sun rays.

A hemostat (b) is often used to reflect the radiation directly on the object to be heated. A combination of heliostat and parabolic reflector may also be used. The heliostat reflects the sun’s rays to the reflector. The heliostat can be adjusted to account for the change in sun’s position. it is very useful type solar energy collector . The reflective surface of a heliostat usually consist of back silvered low iron glass or metalized plastic. These are fixed to light and mechanically stiff back up structures. The reflective surface is generally made up several small segments to allow better control of the flatness than a large single surface. These segments are also easily replaced in case of damage. The heliostats elements are mounted on that are fixed perpendicularly to a horizontals elevation members. Azimuth ally are elevations movements are made by separated drive mechanisms which typically consist of electric motor driven gears connected to the axes.

Helios tats have been found to be very suitable as collectors for solar power plants. Their cost is one of the key costs in the total cost of the plant. It is expected that better manufacturing processes and mass production will reduce their cost. hence it is main type of solar energy collector.

Non-convective solar ponds have been suggested for collecting solar energy on a large scale. A solar pond is a shallow body of water, about 1 metre deep containing dissolved salts to generate a stable density gradient (fresh water on top on denser salt water at bottom). Some of the incident solar energy entering the pond surface is absorbed throughout the depth and the remainder which penetrates the pond is absorbed at the black bottom. If the pond had only fresh water (or water of the same density) the lower layers would heat up, expand and rise to the surface. Because of convective maxing and heat loss at the surface only a small temperature rise in water would be realized. The convection can be eliminated by initially creating a sufficiently strong salt concentration gradient. In this case the thermal expansion in the bottom lower layers is insufficient to destabilize the pond. With convection nearly eliminated the heat loss from the lower layer is only by conduction. Because of its relatively low thermal conductivity water acts as insulator and permits temperatures up to 90%c to be developed in the bottom layers. solar pond is use full for solar energy collector to produce electricity, One way to extract heat from solar ponds is to place pipes in the lower layers and circulate water through these pipes. A simpler and more efficient approach is to take advantage for stable density stratification and use method of selective withdrawal, a technique often use for water quality control in large reservoirs. A sink placed in stably stratified liquid withdraws the liquid from a thin horizontal layer, just as one would draw a single card from a deck. This flow is quite different from one that would occur if the density of water were the same throughout. The phenomenon of selective withdrawal provides means by which, firstly, the stable density gradient required in the upper insulating layer can be corrected and maintained at secondly the hot lower layer can be removed, passed through a heat ex changer and returned at a lower temperature to the bottom of the bottom of the pond. It is sometimes desirable to separate physically the bottom layer from the upper layer by a thin zone transparent partition, generally made of plastic.

The use of solar ponds has been suggested for salt production, space heating and power generation using organic fluid Rankin cycle engines which can operate relatively low source temperatures.

Hence these are solar energy collector if you find any incorrect in above article you must comment below in comment box.

If you want to know more about What are the main types of  solar energy collectors you must watch this video.