A stepper motor is a brush less dc motor whose motor rotates in discrete angular increments when its stater winding are energized in a programmed manner. In other words, a stepper motor is a digital actuator whose input is in the form of programmed energization of the stater winding and whose output is in the form of discrete angular rotation. There are a number of different type of motors available and each has its own advantages and disadvantage.
Stepper motor may be divided into the following groups as far as their construction is concerned.

In this types of stepper motor there is no permanent magnet either on the stater or on the rotor. The stater and rotor are of salient pole type and mode of soft iron stamping.

Variable reluctance stepper motors are quite inexpensive and suitable for light duties such as those in computer and industrial instrument systems.

A two-phase bipolar stepper motor has two coils A and B which are wound around the upper and lower halves of stater. the stater surrounds a rotor that contains specifically aligned permanent magnets. The no. of steps per revolution is determined by the no. of pole pairs on the rotor and stater.

The maximum torque with which the excited motor can be loaded without causing a continuous rotation is termed the stepper motor holding torque.

This motor is used as a paper feed motor of a printer or head drive motor of a floppy disk drive. 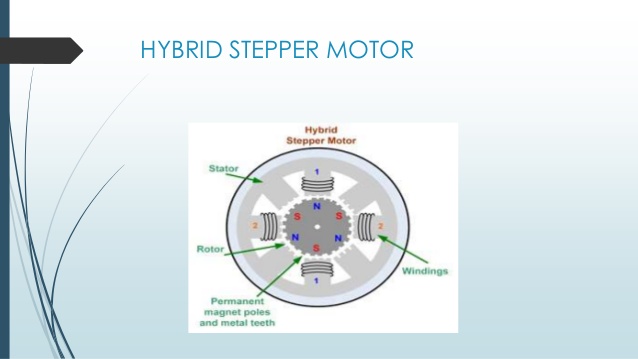