A P-type semiconductor has surplus of holes. It is made by doping an element (accepter impurity) with semiconductor material. The elements like gallium, born or indium (trivalent) are the main accept-or impurities. 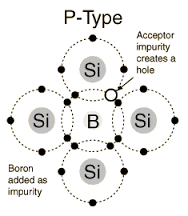