A transistor is a semiconductor device. Which is used to amplify and switch electronic signals and electrical power? It accepts small electrical signal either in the form of current or voltages at the input and then amplifies and provide a large amplified signal.

Bipolar junction transistor working (BJT)
It is a three terminal device made up of silicon or germanium. The word bipolar indicates that both electron transport and hole transport take place in such a device.

This transistor (working) is formed by combination of two junction diodes and is formed of either a thin layer of P-type semiconductor sandwiched between two n-type semiconductors, which  is known as n-p-n transistors. This construction produces two p-n junctions.
The three terminals of BJT are emitter, base and collector.

It is a heavy doped region. It is physically large but smaller than the collector.

It is the middle terminal of the transistor. Base region is very lightly doped and thin. It controls the flow of current carriers.

The collector region is physically larger than emitter. The doping of collector is more than base but less than that of the emitter. It is responsible for collection of carriers.
A base emitter junction and a base-collector junction, separated by a thin region of semiconductor known as the base region. 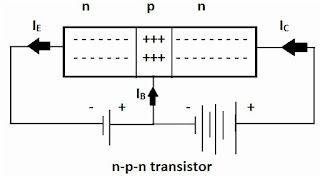 The operation of the NPN transistor is quite simple. First of all, the emitter-base junction must be forward biased and the base-collector junction must be reverse bias as shown in figure.
As electrons majority carriers in N region, these electrons on being forward bias by the voltage emitter base cross the junction and appear in the base region.
Emitter current = Base current + collector current

For the conduction of a PNP transistor, the base-emitter junction always must be forward biased and the collector-base junction must be reversed biased as shown in the figure.
AS the majority carriers in the emitter P-type materials are holes. On being forward biased, holes cross the junction and appear in the base region. This constitutes the Emitter current.
As these holes flow through the N type base, they tend to combine the electrons in the N-region (base). AS the base is very thin and lightly doped, very few of holes injected into the base from emitter recombine with electrons to constitute base current.
As the base-collector junction is reverse biased, the collector region is negative W.R,T the base and holes which are positive in nature, penetrate into base and flow across the collector junction and flow into the external applied voltage. This constitutes collector current.

The transistor workings operate in any of the following three modes depending on the common terminal between the input and output circuit.
1. Common base configuration (CB).
2. Common Emitter (CE) configuration
3. Common Collector (CC) configuration

In the common emitter or grounded emitter configuration’ the input signal is applied between the base and emitter,while the out put is taken from between the collector and the emitter as shown.

In the common collector or grounded collector configuration, the collector is now common through the supply. The input signal is connected directly to the base, while the output is taken from the emitter load as shown
This type of configuration is commonly known as a voltage follower circuit.

Hence it is the transistor working and biasing. if you will find any incorrect above please comment below .

For knowing more about the transistor working you must watch this video.