Oil indicator glass should be kept clean so that oil level is clearly visible . Broken indicate glass should be replaced immediately. when conservator is taken for maintenance magnetic oil level indicator mechanism  should also be cleaned  and inspected for operation. float should be checked to see that there is no oil in the float. 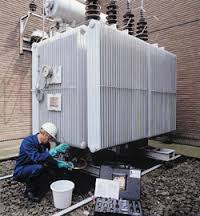 Breather should be inspected frequently especially in a situation where temperature and humidity changes are considerable and when transformer is subjected to fluctuating loads so as long as silica gell is in active stage. its clour is dark blue as it becomes saturated with moisture , its color changes to pale blue/pink when it should be reactivated.

Routine operation and mechanical inspection tests should be caries out as recommended. during service. if gas is found to be collecting and giving alarm,the gas should  be tested and analysed to find out the portable nature of the fault.  Sometimes , it may be noticed that the gas collected is only air. the reason for  this may be that the  oil is releasing  absorbed air due to change in temperature. the absorbed air released on in initial period of six month can be identified to a great extent by a chemical analysis of gas.
Buchholz rely will also give alarm or trip the breaker due to oil level falling below the buchoholz rely . Isolating valve between the conservator and buchholz rely facilities removal buchholz rely for repairs / checking without lowering the oil level in conservator it should be ensured that isolate ring  valves of buchholz ely are kept fully open for  unhindered oil flow

at each yearly maintenance inspection the level of oil in the pockets holding thermometer bulbs should be checked and the oil replenishment is required. the capillary tubing should be fastened down again if it has become loose. dial gases should be kept clean and if broken,replaced as soon as possible to prevent damage to the instrument. temperature indicators found reading incorrectly should be calibrated with standard thermometer immersed in hot water and  it found ,clean the pocket and refill with fresh oil and seal the ping properly. if armoring of capillary is exposed . then retyping must be done by PVC tape of good quality to prevent  further damage to the  armoring or capillary.
Bushings
porcelain insulators and connectors should be cleaned at convenient intervals and minutely examined for any cracks or other defects or narrow are difficult to detect, however they are likely to devoplop rapidly. all such bushing should be replaced. similarly all inside the oil communicating type bushing should be checked by unscrewing air release screws provided on bushing top. the cause  of any serious loss of oil should be investigated. in case  of any sign of oil leakage in the bushing he matter should be refereed to us.
External connections including earthing
all connections should be tight. if they appear blackened or corroded, unbolt the connection and clean down to the bright metal with emery paper. remark the connections and give it a heavy coating of grease. it is particularly that heavy current carrying connections should properly maintained.

check  the transformer for leakages periodically. the bolts should be tightened evenly around the joints to avoid uneven pressure. broken or leaking gaskets should be replaced as soon as possible.
Rollers
after the transformer has been in service for long period , rollers should examined carefully . they should be greased and rotated to see that they turn freely.

Faults and failures in transformer

Although failure in transformers is rare, faults do occur and the reason may be broadly classified as ;
1. failure in magnetic circuit
2. failure in electrical circuit.
3. failure in dielectric circuit
4. failure in structural and mechanical fittings.