Uncategorized
April 9, 2016 admin 0 Comments
In this article we will discuss about the breaking of dc motor. we will also learn that how to stop a dc motor

Breaking is used for stopping for a motor and its load. Mechanical braking and electric breaking are used. In case of mechanical breaking it is difficult to achieve a smooth stop because it depends on the condition of the breaking surface and on operator skills. The electric breaking may be done for various reasons such as.

1. To extend the brake power of the mechanical brakes.
2. Increase the life of mechanical breaks
3. To generate the electrical power and improve the energy efficiency.
4. in emergencies to stop the machine instantly.
5. in production process by reducing the stopping time. 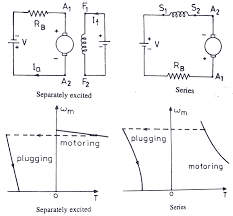 Electric breaking is simple. The electric motor can be made to work as a generator by suitable terminal conditions and absorb mechanical energy. This converted mechanical power is dissipated / used for electrical network.

Breaking can be broadly classified into various

This braking is commonly used in electric trains. This braking is applied when the load on the motor has overhauling characteristics as in downgrade motion of an electric train. Regenerating occurs when back EMF> voltage. When the overhauling load acts as a prime mover and so drives the machine as a generator.  Hence, armature current changes, so armature torque is reversed and speed falls until Back EMF < voltage. During slowing down of the motor, power is returned to the line which may be used for supplying another train on an upgrade.