series parallel circuit are two type , it is in electrical circuit and magnetic circuit . but in both case connection method  are being same.

In series circuit every component as like resister and other electrical component are connected in series which means if any circuit have two component , it called series connection if its one end connect same place and second end connect different place, 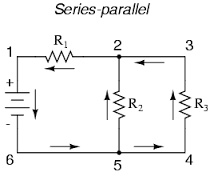 In case of parallel circuit , if any circuit have two component , both component are connect at same place it called parallel connection. according to diagram we easily understand. 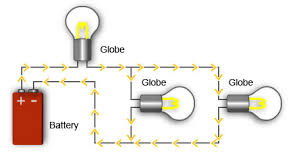 Here are some some word which used in both series parallel circuit .

In generator, transformer or any electrical rotating machines, the magnetic material is used to form a core. A  Coil of conducting material is wound over the core. When a current is passed through this coil, magnetic flux is produced within the core, the strength of this flux depends on the product of number of turns of the coil and the current are carries. This product is called magneto motive force (mmf).
Magneto motive force = N*I
Where
N= number of turns of the coil
I= current through coil, amperes.

Analogy between electric and magnetic circuits

A series magnetic circuit that has parts of different dimensions and material is called a composite circuit. Now let us consider a composite magnetic circuit consisting of three different magnetic materials of different relative permeability’s along with an air gap as figger. Each part of this circuit will have its own reluctance. It is a series circuit because same flux has to through all the mediums. This circuit has two mediums one is iron and another is air. According to the dimensions, iron core has three different dimensions.

Since all the flux produce by the MMF will not be confined to the core, some flux will complete their paths largely through air hence this flux offers a reluctance which is much higher than to the reluctance offered by the core. Alough it is negligible flux but if it is taken into consideration, it gives a practical magnetic circuit. This is also parallel magnetic circuit.
Hence it is the series parallel circuit in magnetic circuit. If you will find any incorrect in this article please comment below.