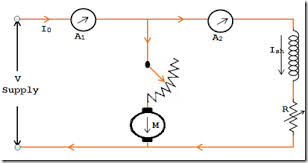 In direct method of testing the generator or motor is put on full load and whole of the power developed by it is wasted,. Brake test is a typical example of direct test. The direct tests can be used only on small machines.
Though this method is simple, bt involves complication in the measurement of mechanical power input in the case of generator and output in case of a motor. If brake is to be applied to a series motor, the brake must be tight before the motor is started, otherwise the armature may get damaged and break into pieces.
The efficiency is:
Efficiency = Output / In put

1. Accuracy in determining the mechanical power output of the motor is limited.
2.  It is difficult to provide full load for the large capacity motor.

This method consists of measuring the losses and then calculating the efficiency. The simplest of the indirect test is Swinburne’s test. Hopkinson test is commonly used test under this method on shunt motors. This method also enables the determination of losses without actually loading the machine. The power is required to supply the losses only, so there is no difficulty in applying this method even to very large machines
The disadvantage of this method is that machine is run light during this test which gives no indication to the temperature rise on load or to the commutating qualities of the machine.

In this method (simplest indirect method) the losses are measured separately and efficiency at any desired load is pre-determined.
The iron and friction losses are determined by measuring the input to the machine on no-load, the machine being run as a motor at normal voltage and speed. The copper losses are calculated from measured values of the various resistances. The method may be applied to level compound generators and to shunt motors.

1. The biggest advantage of Swinburne’s test is that the shunt machine is to be run as motor under no load condition requiring little power to be drawn from the supply based on the no load reading, efficiency can be predicted for any load current.
2. Power required for this test is small.

1. This test cannot be applied to series motors because the speed of a series motor being very high at no-load, it is not possible to run a series motor on no-load.
2. Iron loss in some cases is as high as 50%.

Through this test full-load testing of two d.c. shunt machines can be carries out, mainly identical ones. In this test, power drawn from the supply only corresponds to no load losses of the machines. Electrically these two machines are mechanically connected in parallel and controlled in such a way that one machine acts as a generator and the other as motor. The output of motor is used to drive the generator and the electrical output of generator is used as an input to the motor. Both motor and generator would have run without any external power supply, if there are no losses in the machine. But due to losses, generator output is not sufficient to drive the motor and vice-versa.