In this article we are studied about basic advantage of parallel operation of generator
In dc power plants, power is usually delivered to the from several smaller generators of smaller rating running in parallel instead of a large single unit. These smaller units can be run single or in various parallel combinations to suit actual load demand.
The main advantage of parallel operation is 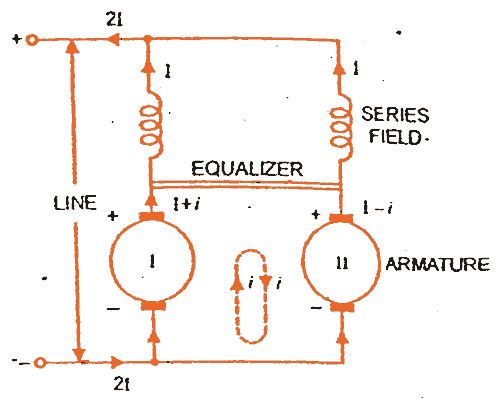 For any electrical equipment continuity of service is a major requirement. If is impossible if the power plant have only a single unit, because in the case of breakdown of either the prime mover or the generator , the whole plant will be shut down,

Normally load on power plant fluctuates between its peak values in day its minimum value during the late night. Because the generators run most efficiently when loaded to their rated capacity. It is economical to use a single small unit when the load is light. When, the load demand increases, a larger generator can be used in place of the smaller one or another smaller unit can be connected to run in parallel with the one which is already in operation. Electric power cost less per KWh when the generator runs efficiently. So, when load demand on power plant decreases, one or more generators can be shut down and the remaining units can be efficiently loaded as per requirement.

Generally periodic routine maintenance and repair of the generators are done. To forestall any possibility of failure and breakdown, it is considered as a good practice to inspect generators carefully . This possible only when the generator is at rest. There must be another generator to take care of the load. It is also essential for safety and economy.

Now days the use of electricity is continuously increasing. When added capacity is required, the new unit can be simply paralleled with the old units . Addition to plants is frequently made in order to supply power to greater loads, which is made by design engineers who continuously checks this capacity.

The engines used in smaller generators are usually high volume, over-the –road truck or industrial engines. These high quality engines are very reliable due to the level of tooling and automation utilized in their manufacture. Advanced manufacturing technology, along with market pressures and economies of scale allow these engines to provide the lowest cost per KW in the industry.