Types and characteristic of HRC fuse

Fuse is a current interrupting device which used for protection from over current. It is used for short circuit protection in medium voltage (up to 33KV) and low voltage (up to 400V)..  In modern this type fuse (HRC) provides reliable discrimination and accurate characteristics. In some point of view HRC fuse is better than circuit breaker.
Types of HRC fuse

This type of fuse we can see in our houses. The fuse carrier can be pulled out and the blown out fuse element (which wire melts) can be fill-up by a new one and carrier is replaced in the fuse base.

The fuse link element (the wire which melts) is enclosed in a totally enclosed container and is provided with metal contacts on both sides.

A fuse –link which control current to a considerable lower value than the prospective current. 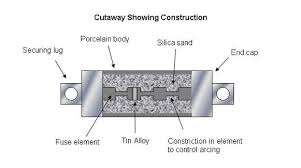 In this fuse after the operation of fuse –carrier drop out.  There by providing isolation between the terminals.

In which fuse the arc occurring during the operation of the fuse is extinguish by expulsion produced by the arc.

A device which incorporates a fuse and a mechanical device, the operation of fuse release the striker with certain pressure and displacement. 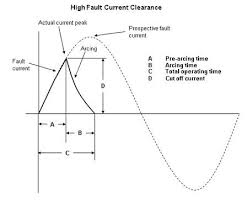 Process of arcing and  pre-arcing resulting in blowing of fuse-link.
Cut-of. The melting of fuse-element before the current reaches the required peak. The value of current at which the cut-off occurs is called cut-off value.

Time between commencement of the cut-of and the  current loop .

It is Pr-arcing time plus acting time.

• It is also used of capacitor protection
• it is also provide Protection of underground distribution system
• It is used in meter board in residential application.