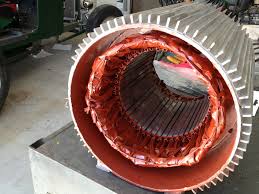 Active length of wire of winding is called conductor in which the EMF get generated on flux linkage.

A turn consists of two conductors situated one pole pitch apart and connected in series.

The distance between starts of two continuous poles (N & S ), is called pole pitch it is generally taken 180 degree.

The distance between start of two continuous phase is called phase spread, it is 120 degree.

According to pitch there are two type of winding

If coil span is to one pole pitch or 180 degree. Then it is called full pitch winding.

If coil span is less than one pole pitch then it is called short pitch winding. Here coil span is 150 degree.

Possibility of generation of harmonics and vibration in shaft.

In this base it is divided in two parts

• According layer of winding

If each slots of motor consist one coil side then it is called single layer winding.

If each slot of motor consist two coil sides than it is called double layer winding.

It is increase the load carrying capacity of the motor.

It increase the size and prize of motor.

• According to connection of motor

The winding in which the conductor comes in back word direction to connect the next conductor in the previous pole are called lap winding it is used that time when  motors required more  current, less  voltage.

The winding in which the conductor doesn’t returns but those in forward direction to connect to the nest conductor situated in the pole are called wave windings. 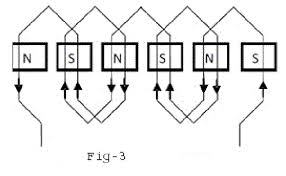